Features: Foreign doctors in Canada who 'Aren't Good Enough'; A Man is Hanged - an article on Capital Punishment by Alexander Ross - Parliament has been promised a free vote on the matter - the Turpin/Lucas execution could be the last in Canada; One doctor's lonely, costly battle for medicare - Dr. Sam Wolfe; Everybody here loves Charlie Chamberlain, of Don Messer's Jubilee; Why do we laugh?, by Joan Weatherseed; Downtown in the Arctic - Russia lifts the curtain on Arctic Siberia for a team of Canadian experts - a firsthand report by Jack Austin, with colour photos; My 4 Hours as a Spy - Wendy Michener innocently snapped a picture in East Germany and was arrested; Remember when people came first (not pets), by Robert Thomas Allen; When Canada Built the Strongest Men (and women) in the World! - Louis Cyr and Mme Henri (Marie-Louise) Cloutier; Rare and *fatastic* colour CTV centerfold promotes many of their tv shows; and more. Average wear. Minor moisture stains to upper corners. Address label on front cover. A sound copy. 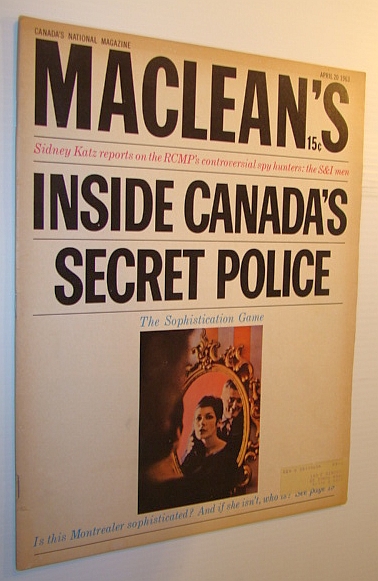