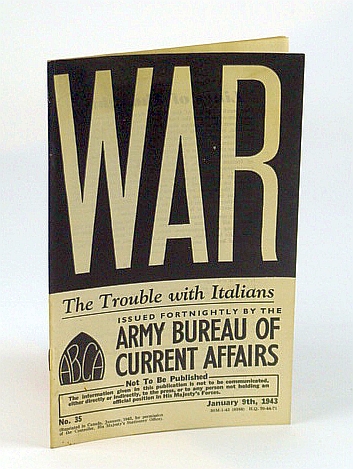 12 pages. "Not to be Published - the information given in this publication is not to be communicated, either directly, to the Press or to any person not holding an official position in His Majesty's Forces." - from front cover. Reprinted in Canada January, 1943. Contents: The Trouble with Italians - summary and estimate of the Italian Army with map showing where Italian troops were as of June 1940, and another map showing same as of January 1943; The First Time They Saw Paris - Peter de Polnay of the Pioneer Corps relates his experiences of witnessing German troops enter Paris; Denta...
View More...